Whitewater Rafting on the Wild and Scenic Tuolumne River

In October of 1968 The United States Congress signed the National Wild and Scenic Rivers Act. 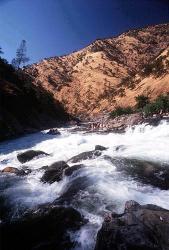 It is hereby declared to be the policy of the United States that certain selected rivers of the Nation which, with their immediate environments, possess outstandingly remarkable scenic, recreational, geologic, fish and wildlife, historic, cultural or other similar values, shall be preserved in free-flowing condition, and that they and their immediate environments shall be protected for the benefit and enjoyment of present and future generations. The Congress declares that the established national policy of dams and other construction at appropriate sections of the rivers of the United States needs to be complemented by a policy that would preserve other selected rivers or sections thereof in their free-flowing condition to protect the water quality of such rivers and to fulfill other vital national conservation purposes.

Since the injunction of the Tuolumne river to the Wild and Scenic Rivers System, the Clavey river, a tributary of the Tuolumne has also been up for consideration to be added to the system. The Clavey was being considered for designation to protect it from threats of hydroelectric development. The Clavey is not designated Wild and Scenic, but has been spared from hydroelectric projects. The Clavey was saved with the help ofFriends of the River (FOR); a river conservation organization.